VFW Stands with France in Wake of Attack

Daniel Payne Posted on November 25, 2015 Posted in news No Comments 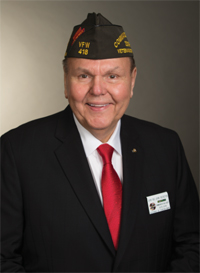 WASHINGTON (November 15, 2015) â€“ While extending his condolences and support to the people of France, the national commander of the Veterans of Foreign Wars of the United States also called Fridayâ€™s terrorist attack a wakeup call to an America that is ill prepared to defend against a similar attack in America.

â€œThe VFW stands with Americaâ€™s first ally as it mourns in the wake of this vicious and cowardly attack, but the attack on Paris should also serve as a wakeup call that our own homeland is vulnerable to attack from radical Muslim extremists who are hell-bent on destroying us and our entire way of life,â€ said VFW National Commander John A. Biedrzycki Jr.

â€œAmerica is vulnerable because we have porous borders, a broken immigration system, and elected and appointed officials who refuse to recognize this enemy as a threat to our national security, an enemy who enjoys the great tactical advantage of choosing when and where to attack,â€ he said.

â€œAmerica is vulnerable because we have a Congress that still refuses to eliminate sequestration, which takes a meat cleaver to the budgets of national defense, intelligence and homeland security. Yet every member of Congress was first in line this past week to thank all who served on Veterans Day,â€ he said.

â€œThere must not be a third time,â€ he said, â€œand thatâ€™s why the VFW will do what we must to force Washington to wake up and destroy this enemy before they strike our homeland. There is no higher nor more immediate national priority.â€