THE FOURTH OF JULY 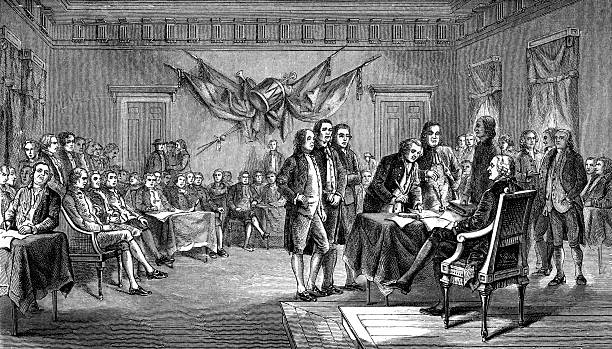 And A Brief History of the Revolution

On this day in 1776, Colonists in what is now the United States of America declared their independence from the British monarchy. Though there were many reasons for this secession, among the top were excessive taxes, quartering (which allowed British soldiers to take up residence in people’s homes), the Tea Act of 1773, the Sugar Act of 1764 and the Stamp Act of 1765.

The Stamp Act taxed anything printed on paper, from newspapers and playing cards to pamphlets and dice and was a last straw for many overtaxed citizens of the 13 colonies. The Act was repealed a year later, but it was too late – cries of revolution and a demand for independence were already growing. When the British Navy arrived in Boston in the 1770s with the intention of exercising power, instead of being intimidated, colonists were enraged. Years earlier, the phrase “Taxation without representation is tyranny” had spread throughout the colonies as a rallying cry; this continued.

In March, 1770 a fight between Bostonians and the British led to soldiers shooting and killing four colonists. This became known as the Boston Massacre. Three years later, colonists disguised as Mohicans raided a British ship and dumped all of their tea in the harbor, which is remembered as the Boston Tea Party. By 1775, battles were breaking out with increasing regularity.

In June 1776 the Continental Congress met at what is now called Independence Hall in Philadelphia. Less than one month later, on July 4, 1776, the Continental Congress officially adopted the Declaration of Independence, which had been written predominately by Thomas Jefferson, who emphasized the necessity of a nation that protected the rights of “Life, liberty and the pursuit of happiness.”

In 1778, France, still sore about their defeat to Britain in the Seven Years’ War, joined the conflict on the side of the colonists. By 1781, those seeking independence from England had essentially won, though it took two more years of fighting for the Crown to surrender, which they did on September 3, 1783, when they formally recognized the independent United States by signing the Treaty of Paris.

In 1776, John Adams wrote to his wife Abigail that July 2, “will be celebrated, by succeeding generations, as the great anniversary festival” and that the celebration should include “pomp and parade… games, sports… bonfires and illuminations from one end of this continent to the other.” He was right about the parades and bonfires, though slightly off on the date, but with July 2 falling on Saturday this year it is likely many Americans will, in fact, be celebrating on that day.

How do you plan to spend Independence Day this year? If celebrating with your Auxiliary, let us know! We want to feature your Auxiliaries in Action. Email us at info@vfwauxiliary.org.