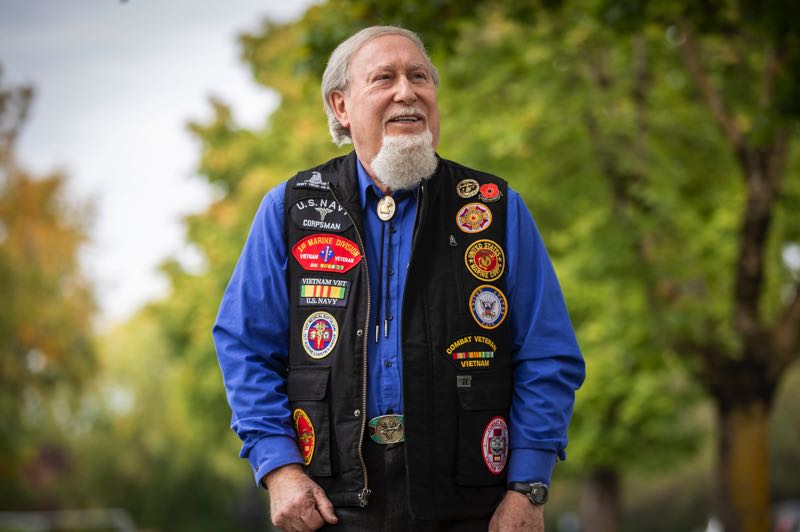 When Ben Knight was a youth growing up in Anchorage, Alaska, he often remembers visiting his mother, who was a nurse in a local hospital. What he recalls most clearly is the smell of alcohol in the rooms and hallways. He grew to love that smell — he knew it meant people were being helped.

So, when he decided to join the military, he told the recruiter that he wanted to go into the hospital corps, a choice that seemed only natural, since not only was his mother was a nurse, but his grandfather had been a doctor.

Knight ended up training at Balboa Naval Hospital in San Diego, soon serving as a medical technician who handed instruments to doctors during surgery.

He got pretty good at it, and after two years, Knight had moved off the base. He would often stroll down to Mission Beach to relax.

However, he soon got orders stating he would be joining the Fleet Marine Force. Thereafter, it was off to Vietnam from 1966 to 1967, where he worked at a military hospital serving U.S. Marines.

Most of the time, the wounded soldiers arrived in UH-1 Huey helicopters.

“I was stationed in the big Marine base in Chu Lai,” Knight said. “It was adjacent to this cliff overlooking the South China Sea, so we would see the helicopters.”

Knight said when the choppers would come in, Red Cross trucks would back up to the helicopters, put patients inside and bring them up to triage, “kind of like the ‘M*A*S*H’ unit on TV.”

“My job was to assist the surgeon, and there were times when we would have guys that were wounded with multiple wounds,” he said, saying he was responsible for helping sew up the wounded. “We didn’t save everyone, but we saved a hell of a lot of them.”

Knight remembers medical personnel sometimes would work for days nonstop, placing instruments in gas-powered autoclaves to sterilize them. That kept everything going until the surgery was done.

But there were times when Knight was able to enjoy a little relaxation by grabbing flippers and a snorkel and swimming at a nearby lagoon.

Knight said he recalls how his services were appreciated. Once, a cook at the base got into a fight with a Marine who was brandishing a razor and almost took off the cook’s earlobe. With a piece of the nearly severed ear still dangling, Knight remembers, he used about 50 little stitches “and sewed that ear up just exactly like it was before.”

In gratitude, the cook sent Knight and his co-workers a big tray of sandwiches.

“When you’re a friend of the cook, you get good things,” he quipped.

Knight said he “got pretty good at sewing,” and when he left the Navy, he went to the former Bess Kaiser Hospital in Portland. At that time, the hospital offered an associate degree program to train Vietnam veterans, and he became a first surgical assistant.

“My specialty for the rest of my life — for another 40 years — was physician assistant, with a specialty in surgery,” Knight said. “The Navy taught me a life job.”

His last job was with Orthopedic + Fracture Specialists on Southwest Barnes Road in Beaverton, where he spent eight years before retiring.

He credits his friend Pat Forrester with getting him to join the Tualatin VFW, a place where he’s met some nice folks that he shares memories with and as well as “some bonding.”

Knight’s experience has convinced him that the United States never should have been in Vietnam in the first place. But he learned that there were “a lot of tough guys out there that would put their lives on the line.”

“And I learned patience, humility, and the realization that there were young men that were giving up their lives for a cause,” he said, “and I learned to get better at what I was doing.”

Editor’s note: This story originally appeared in our 2021 Salute to Veterans special publication, inserted into newspapers the week of Nov. 8, 2021. Find a digital version of the full publication on our website. This profile of Ben Knight is sponsored by the City of Tualatin.