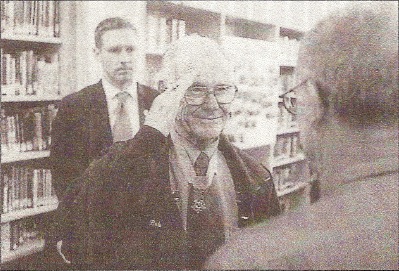 Bob Maxwell was an infantrymanÂ in France in 1944 helping to set up a command post when it was attacked by GermanÂ soldiers. During the fighting,Â he instinctively droppedÂ down on a grenade in the dark,Â protecting his fellow soldiers.

The blast cost him much ofÂ his right foot, and the selflessÂ act of bravery earned him theÂ Medal o fHonor. At 93 he is theÂ nation’s oldest living recipientÂ of the highest military honor.

On Friday in Bend, where he lives, Maxwell was presented with a special commemorative set of postage stamps honoring the few surviving Medal of Honor recipients from World War II.

The stamp folio includes images of the Army and Navy versions of the medal and photos of 12 of the 464 who received the honor for fighting in World War II. Maxwell is one of eight people who are still living. The stamps are to be formally issued Monday, Veterans Day, in Washing, D.C., U.S. Postal Service spokesman Peter Has said.

Maxwell says he feels his life was spared “by divine providence,” for some purpose.

“I’ve been spending the 60 or 70 years since then trying to figure out what the purpose is,” he said. “My main philosophy in life is to be a soldier. If you look in the dictionary for the definition of a soldier, the first one in the dictionary I have says it is one who serves.”

After his discharge, he moved to Oregon and learned auto mechanics on the GI Bill. Before getting married, he “wore out three motorcycles,” then spent much of his life teaching auto mechanics.

In recent years, he has focused on helping other veterans. He is a member of the local group Band of Brothers, which has outfitted a van to provide medical care to homeless vets, and a director of Honor Flight, which helps World War II vets visit the WWII Memorial in Washington.

“I own the country a great debt because of the freedoms it has given us, and for the perks I received personally from receiving the medal,” he said. “There is a debt I can never pay back.”

Maxwell grew up on a farm in Kansas during the Dust Bowl and was logging in Colorado when he was drafted. Despite his grandfather’s Quaker beliefs, he wanted to fight for his country. He was shipped as a replacement to the 3rd infantry Division outside Casablanca, Morocco, where he was assigned to set up telephones for a headquarters company.

After recovering from wounds in the invasion of Italy, he was stringing telephone wire on Sept. 7, 1944, to a house in Besancon, France, when the enemy opened fire with an anti-aircraft gun and explosive rounds blasted the roof tiles at his feet. He jumped to the ground and took cover with three other men behind a wall.In the dark, he heard a grenade land nearby.

“I started to feel around for it to see if I could find it and throw it back,” Maxwell said. “I didn’t have enough time. I dropped where it was,” using his blanket to help muffle the blast.

When he awoke, most of the others had gone, but his platoon leader was still there, and helped him hobble to safety.

The three others with him were uninjured. Besides his foot, Maxwell suffered wounds to his left arm and was grazed in the head.

“There is no way to explain it,” he said of his actions. “I’m not sure what it is. It’s not like charging up a hill with a flame-thrower and wiping out pillboxes. A lot of though has to into that. This event was occurring over a period of 3 to 4 seconds.”

Medal of Honor recipient Bob Maxwell, 93, receives the commemorative stamp from the USPS local postmaster in the library at Bend High School on Friday.